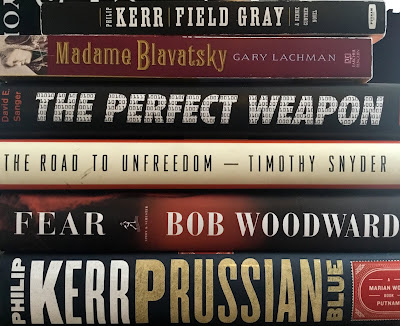 It’s been a decade since John McCain faced Barack Obama, Sarah Palin got her close up, the economy collapsed, and reality began to blur. Soon conspiracy theorists were going mainstream. Then one made it to the White House.

Things have been strange and often ugly ever since.

It can’t all just be an accident of history. But how exactly did the Trumps, the Russians and their international co-conspirators mess with American minds to seize power? In several recent books, deeper answers gradually emerge. But some of the revelations are so unsettling it helps at times to escape into fiction.

Here are some recommended readings to help cut through the fog of info-war.

Simultaneously engaging and deeply disturbing, Timothy Snyder’s new contemporary history should feature a warning: Abandon all illusions, since they aren’t likely to survive.

Building on ideas introduced in his pocket guide, On Tyranny, Snyder describes the last six years as a period of shattering change that has led Russia, America and parts of Europe into what he calls schizofascism, or, in Trump’s case, possibly “sado-populism.”

One core concept is the shift — with strategic nudges by the Putin gang — from the politics of inevitability to the politics of eternity. Inevitability politicians argue that specifics of the past are ultimately irrelevant, merely grist for progress; Eternity politicians see endless cycles of threat, victimhood, and restoration, and have a penchant for supressing facts, dismissing reality, and creating political fiction.

“Americans were vulnerable to the politics of eternity,” Snyder explains, “because their own experiences had already weakened inevitability. Trump’s proposal to ‘make America great again’ resonated with people who believed, along with him, that the American dream was dead.

“Russia had reached the politics of eternity first, and so Russians knew the techniques that would push Americans in the same direction.”

Fear: Trump in the White House

Even if you have been paying close attention, Bob Woodward’s latest book adds new insights. The title refers to Trump’s core belief that fear is the source of “real power.” Focusing largely on how key policies have been handled, specifically trade, North Korea and the Middle East, he serves up key incidents and stunning dialogues that showcase the President’s resistance to any facts or information that conflict with his instincts and often bizarre assumptions.

Some of those instincts may be worth considering, for example that the US military should withdraw from Afghanistan and South Korea. But his motives and behavior are so shocking that they undermine more reasonable goals.

Woodward finishes with a riveting meeting between Robert Mueller and Trump’s legal team that shows why even getting him to testify under oath is pointless.

The Perfect Weapon:
How the Cyber Arms Race Set the World Afire

The original subtitle of this disturbing book, by New York Times national security correspondent David E. Sanger, was apparently replaced with the more neutral “War, Sabotage, and Fear in the Cyber Age.” But the new line leaves out a key point: that it is truly an “arms race,” which began — before most people noticed — with a US preemptive cyber strike on Iran’s nuclear program.

Since the covert operation known as Olympic Games, however, Russia, North Korea and China have led the pack, and the US has become the disoriented target of sophisticated “hybrid warfare.” And this deadly “perfect weapon” could literally set cities afire and put millions of civilians at risk.

Dark Star Rising: Magic and Power in the Age of Trump

By now we know that it certainly wasn’t raw intelligence that catapulted an infamous celebrity / mob boss into the White House. But Gary Lachman makes a case for something deeper and darker than a corrupt campaign, succeeding with the aid of Russian info-war and “active measures.”

If half what he reports is true, we’re in bigger trouble than we think.

Call it chaos magic, positive thinking or New Thought, Lachman claims that hidden forces may well have helped reshape the global “narrative” and primed mass conscousness for a postmodern authoritarian wave. At the center of this hostile takeover, he persuasively explains, is Alexander Dugin, Putin’s Rasputin, a professional conspiracy theorist who brought his fascinations together in a “mosaic of ideologies” that centers on the rise of Eurasia.

Dugin’s aim, which fit with the tactics and goals of the US alt-right, was apparently to “break the reality barrier” and “make things happen.” This short, unsettling book suggests that he and others did just that.

More than a century after departing the material plane, the life and thought of Helene Blavatsky remain compelling, controversial, and greatly under-appreciated. But Lachman also tries to correct this with his sympathetic biography of a very different Russian, revisiting many of the key mysteries surrounding HPB with an open mind and heart. The topics range from her early adventures and “manifestations” to the possible identity of the secret masters who guided her spiritual mission.

Assessing previous biographies and the arguments of critics, this is a smart, accessible update, and a welcome reminder of how Blavatsky challenged both materialism and repressive religion at a key moment, launching the Theosophical movement and inspiring artists, thinkers and leaders from Kandinsky and Yeats to Annie Besant and Mahatma Gandhi.

Sometimes I simply need to seek respite and insight in a different time. Lately, it has been the early 20th Century, and in this regard, Philip Kerr never disappoints in his extraordinary Bernie Gunther series. Kerr spans decades with a memorable anti-hero, a former Berlin police detective full of rage and moral complexity. Combining great writing with deep irony and a noir sensibility, the author chronicles events from the “Great War” to the Cold War in 14 vivid historical / suspense novels.

Kerr died last March, and his final Gunther book, Metropolis, will be published around that time in 2019. Meanwhile, just for example, Field Gray (#8) focuses on Gunther’s World War II experiences and subsequent struggles as a political prisoner. Contrary to most news reports, when I finish one of Kerr’s tales, despite the dark narrative I can hardly wait for more.
Posted by Greg Guma at 9:35 AM No comments:

Written over the last decade, these 77 articles trace a path from cultural polarization and institutional breakdown to fascist revival. Material (listed here from most recent) was selected and published by the Center for Global Research  — Click links to access CGR’s index and texts. Many articles are also posted here (2015 and after), on the Maverick Media archive and Toward Freedom, or The Vermont Way. They have been viewed and shared online more than one million times. This week’s featured story: Scapegoating Immigrants 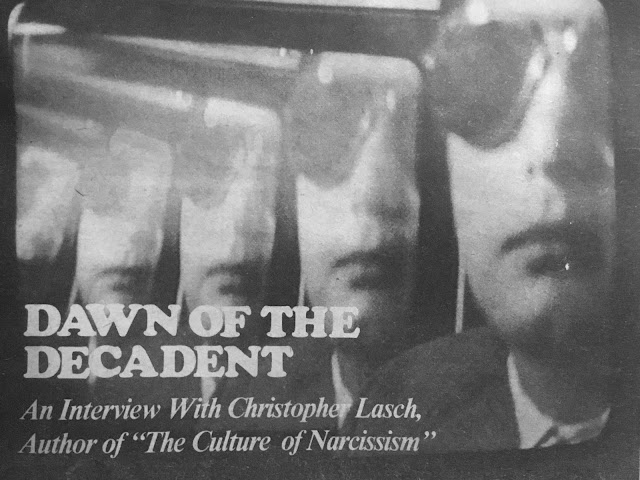 Dawn of the Decadent:
Breakdown of Culture, Emerging Psychic Assault on Humanity
July 31, 2018

The History of Class Struggle in Vermont: From Socialism to the American Plan
December 31, 2016
U.S. Presidential Lying Is Nothing New. December 12, 2016
Rendezvous with Uncertainty: On Post-Modern Politics
December 10, 2016
Blaming Outsiders: An American Tradition Since 1800  November 07, 2016
No Winner: What Happens If the Presidential Election is Close?
November 07, 2016
Addicted to War: The Seductive Myths of Militarism  March 17, 2016
Defeating a Demagogue: It Has Happened Before  March 15, 2016

US Military Spending: Where are the Jobs?  May 31, 2012
Lost Memories: Unpacking the Reagan Myth (before it spreads)
June 08, 2011
Historical Background: Conquest and the Struggle for Africa’s Soul
April 08, 2011
Pacifica Radio’s Progressive Plight  August 07, 2010
The Presidency Problem: High Crimes  September 28, 2009
Scared Socialist September 21, 2009
https://www.globalresearch.ca/author/greg-guma
Posted by Greg Guma at 8:31 AM No comments: