Addicted to War: The Seductive Myths of Militarism

An ever-deepening militarization threatens to hollow out democracy and leave the country isolated and bankrupt, morally and economically.

George Washington could hardly be called naive about the use of military power. Yet, in his presidential farewell address, the general-turned-political leader issued a warning that would be wise to reconsider since the United States began pursuing a foreign policy based on preventive war and a crusade to spread democratic capitalism worldwide. Citizens should be wary, Washington explained, of “those overgrown military establishments which, under any form of government, are inauspicious to liberty, and which are to be regarded as particularly hostile to republican liberty.” 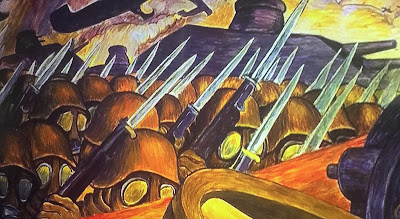 While he considered a respectable army essential to national well-being,
Washington also believed that an overgrown military establishment in the New World would replicate the errors of the Old one. Unfortunately, this concern – considered superfluous in 1796 – has been largely ignored in the two centuries that have seen the United States transform itself from a revolutionary experiment into the world’s only superpower.

As Andrew J. Bacevich has argued in The New American Militarism, the roots of the change go deep and cannot be traced a single political party or administration. Yet, the problem was intensified by the disorientation that followed the Vietnam War, as well as illusions about the invulnerability provided by technology and a neoconservative argument that military power provides the “indispensable foundation” for the nation’s unique role in the world.

Coming from a left-leaning writer, such a conclusion would not be surprising. But Bacevich is a West Point graduate, veteran of Vietnam, and former Bush fellow at the American Academy in Berlin. As such, he has watched the evolution of what he describes as an “ever-deepening militarization of U.S. policy” that threatens to hollow out democracy and leave the country isolated and bankrupt, both morally and economically.

Conservative pundit Pat Buchanan made a similar case in Where the Right Went Wrong (2004), his book on how neoconservatives hijacked the Bush presidency. Calling the post 9/11 Bush Doctrine “democratic imperialism,” he warned that it would “bleed, bankrupt, and isolate this republic. This overthrows the wisdom of the Founding Fathers about what America should be all about. This is an American version of the Brezhnev Doctrine, wherein Moscow asserted the right to intervene to save Communism in any nation where it had once been imposed. Only we Americans now assert the right to intervene anywhere to impose democracy.”

However, while Buchanan sees Ronald Reagan as a true conservative who would not have countenanced “regime change” and preventive war unless the evidence of an imminent attack was absolutely solid, Bacevich argues that Reagan romanticized the U.S. military in order to boost defense spending and confront the Soviet Union, setting the stage of future militarization. More than anyone else, he writes, Reagan “conjured up the myths that nurtured and sustain present-day American militarism” and made military might “the preferred measure for gauging the nation’s strength.”

On the other hand, the shift was underway before Reagan. Bacevich sees Jimmy Carter’s failures – including entreaties to end the U.S. addiction to imported oil and turn toward self-sufficiency, as well as a disastrous covert mission to rescue U.S. hostages in Iran – as inadvertent persuasions, convincing people that a weak military was intolerable and thus playing into the agenda of the neoconservative movement.

After Reagan, Bill Clinton aided the project by backing military enhancements like “smart weapons” and “flexible power projection capabilities,” as well as intervening “with great frequency in more places for more varied purposes than any of his predecessors.”

Although neoconservatism can be traced back to 1960s attacks on the New Left and counterculture by Norman Podhoretz and others, it didn’t gain much traction until the Reagan years. The argument begins with the assertion that “evil” will prevail if those who confront it flinch from duty. The primary example used before 9/11 was appeasement of Hitler by Britain and France, combined with U.S. isolationism before World War II. The only effective response, they conclude, is military power, not vague and unrealistic international negotiations. In this regard, the United States has no choice but to assert global leadership, and the mission is open-ended. Neoconservatives leave no room for pessimism or self-doubt; in fact, they consider such thinking close to treasonous.

At home, concervatives defined a set of related threats, among them sexual license, vulgarity, an absence of standards, and the decline of institutional legitimacy. In response, they have been impelled to discredit 1960s legacies such as multiculturalism, affirmative action, feminism, and gay rights, while promoting “traditional values” and so-called beleaguered institutions, notably marriage and the nuclear family.

Furthermore, conservatives claim that the crisis is permanent and dire, and the only antidote is a heroic form of leadership Bacevich defines as a “weird homegrown variant of the Fuehrer Principle.” He holds back from using the word fascist, but as Willhelm Reich explained in The Mass Psychology of Fascism (1933/1946), identification with a “Fuehrer” forms the psychological basis of national narcissism. In pre-war Germany, “The structure of the fascist proved to be characterized by metaphysical thinking, piety, and the belief in the abstract ethical ideas and the Divine mission of the ‘Fuehrer’,” Reich explained. “These traits rested on a basis of a strong authoritarian fixation to a Fuehrer-ideal of the nation.”

In the United States, other factors assisting the rise of militarism include Hollywood and evangelical religion. The entertainment industry’s contributions include a series of influential films that have etched a romanticized vision of the military into popular consciousness. Bacevich focuses on three: An Officer and a Gentleman (1982), which suggests that becoming an officer is the way to move from a dead-end existence to status and respectability, “up where we belong;” the Rambo series (1982-88), which argues that soldiers aren’t given the respect they deserve at home and should be set loose to win abroad by any means; and Top Gun (1986), a feature-length recruitment poster that made combat look clean, technologically sophisticated, and highly cool.

Since then Hollywood’s war narrative has become slightly more complex, but no less romantic. Dozen of major war films have been released in the last two decades, many of then looking back at World War II as a violent crucible that nevertheless reflects noble national ideals. Other films support neoconservative arguments about the dangers of a half-hearted response to evil and how political considerations threaten humanitarian missions.

As far as religion is concerned, a chapter titled “Onward” opens with the bold statement that the United States remains, “as it has always been, a deeply, even incorrigibly, Christian nation.” Noting that about 100 million people in this country define themselves as evangelicals, he states bluntly that they tend to be conservative and vote Republican.

Beyond that, evangelical Christians also celebrate the military as a bastion of the values needed to stop the current slide toward perdition and thus have provided religious sanction to militarization. This links up nicely with neoconservative logic, offering support for the idea of striking the first blow. Books like The Church and the Sword and One Nation Under God replace the “just war” idea with a “crusader theory of warfare.” As Hal Lindsey, author of The Late Great Planet Earth, argues, “The Bible supports building a powerful military force. And the Bible is telling the U.S. to be strong again.”

With evangelicals leading the way, both within the military chaplaincy and the GOP, “Conservative Christians have conferred a presumptive moral palatability on any occasion on which the United States resorts to force,” Bacevich concludes. “They have fostered among the legions of believing Americans a predisposition to see U.S. military power as inherently good, perhaps even a necessary adjunct to the accomplishment of Christ’s saving mission. In doing so, they have nurtured the preconditions that have enabled American infatuation with military power to flourish.”

Bacevich also posits that the world is in the midst of World War IV, and argues that this battle to guarantee U.S. citizens “ever-increasing affluence” actually began when Jimmy Carter declared in January 1980 that, “An attempt by any outside force to gain control of the Persian Gulf region will be regarded as an assault on the vital interests of the United States of America, and such an assault will be repelled by any means necessary, including military force.” That was called the Carter Doctrine.

Once the "Doctrine" was in effect, Reagan ramped up the military’s ability to actually wage the new world war, thus cocking the trigger that George W. Bush ultimately pulled. What has allowed the crusade to proceed, Bacevich argues, is a combination of self-induced historical amnesia and a momentum for militarization that has built since the national trauma induced by defeat in Vietnam .

Although suggesting that the country may be stuck with a “misbegotten crusade,” he does offer a series of alternative principles that might mitigate the effects. The list includes restricting military actions to those that truly reflect what the U.S. Constitution calls “common defense,” forcing Congress to exercise its oversight concerning war, renouncing preventive war in favor of force as a last resort, limiting U.S. dependence on foreign resources, reorganizing the military around defense rather than power projection, basing the U.S. military budget on what other nations spend (rather than a fixed percent of GDP), and more fully funding diplomacy to better communicate with the rest of the world.

He finishes with three ideas for reforming the military itself. Favoring the idea of “citizen soldiers,” Bacevich suggests that the current all-volunteer force should actually “mirror society” rather than becoming increasingly “professionalized.” Specifically, he calls for shorter enlistments, more generous signing bonuses, flexible retirement options, and free college education for anyone who serves. If the military is rooted among the people, problems that develop in any future interventions are more likely to be identified early and corrected. At least that's the hope.

Bacevich also calls for a reexamination of the role of the National Guard, along with its expansion. “We need more citizen-soldiers protecting Americans at home even if that means fewer professional soldiers available to assume responsibility for situations abroad.” And finally, he urges an end to the current painful and dangerous separation between the military profession and the rest of society. As a former military man, he sees war as part of the human condition. But he wants to bind the profession to the “outside world” rather allowing it to keep the world at bay.