WE MET AT the start of a mind-boggling week. President Bill Clinton was two days from launching a new round of Iraq bombings – on the eve of his own impeachment. As Vermont’s sole representative in the US House, Bernie Sanders had already made up his mind about Clinton: yes to censure, no to removal from office or resignation. But he was equivocating on the subject of intervention.


A critic of high defense spending who had voted against the first Gulf war, Sanders nevertheless thought that military action was sometimes appropriate, in Yugoslavia or to oust a dictator like Saddam Hussein. “I do not want to see a man like this develop biological or chemical weapons,” he explained. “So, it’s not an easy situation.”
﻿﻿

The real trouble wasn’t militarism. he asserted; it was education and public opinion. Unlike the broad opposition that emerged to the Vietnam War, Sanders explained, about “80 percent of the American people” were currently willing to support just about any decision to use force. “That makes it difficult for people in Congress to oppose it,” even though “the tactic often backfires.”


More sobering, he didn’t expect that situation to change in the near future, “until tens of millions of people say no.” And he didn’t think most peace activists were on the right track. “Winning credibility is the first step to building a broad-based movement,” he counseled, and the way to do that is to take on bread and butter issues. “I don’t think you can just look at the issue of war and peace,” Sanders said. “People have got to know you are on their side.”


“I have long been concerned that some ‘progressive activists’ do not stand up and fight effectively or pay enough attention to the needs of ordinary Americans,” he explained. “Right now, one of the issues I am terribly concerned about is what is being proposed for social security, which I think would be a disaster. It affects senior citizens today. It affects future generations. How much discussion is there of that issue among activists and intellectuals, who should understand it? I’ve heard very little.”


Before arriving in Congress, Sanders himself had little idea of how the legislative branch really operated. The same was true during his early days as Burlington mayor, when he learned hard lessons about dealing with an unsympathetic city council and entrenched bureaucracy. Being a congressman change his perspective; years later, he knew how the game was played. But it still galled him that “what we read in the textbooks about how a bill becomes a law just ain’t the case.”


As an example he pointed to conference committees, which are supposed to iron out legislative differences. “How many people know that when you have the House and Senate agreeing on a position, the ten people in that room can junk it completely – even when there is agreement?”


It was the kind of rhetorical question that peppered his speech, this one conveying an angry belief that the public is kept in the dark about routine abuses of power and corruption of democratic processes. “I get outraged at both the television and newspapers about their refusal to educate people about how the process works,” he complained.


A key lesson of his early years in Congress was that winning often involved working with people whose stands on other issues you abhorred. In fact, much of his legislative success came through forging deals with strange ideological bedfellows. An amendment to bar spending in support of defense contractor mergers, for example, was pushed through with the aid of Chris Smith, a prominent opponent of abortion. John Kasich, whose views of welfare, the minimum wage and foreign policy could hardly be more divergent from Sanders’, helped him phase out risk insurance for foreign investments. And a “left-right coalition” led by Sanders helped to derail “fast track” legislation on international agreements pushed by Bill Clinton.


Now at the mid-point of his US House career, Sanders had become skeptical about the urge to “moralize and be virtuous and not talk to anybody.” While acknowledging that it felt odd at times having ultra-conservatives as political allies, “the job is to pass legislation– and I say that in a positive sense – so you seize the opportunity to make things happen."


Still, closer to his heart was another role – provocateur. “I respect people who are in the political process,” he put it with a smile. He also obviously enjoyed flushing out political elites. “Issues affecting billions of people with the world not knowing what’s going on,” he complained. “I think, as a result of the role I and other have played, there may be more transparency. But obviously the issue goes beyond that.”


We were getting to the root of his worldview: international financial groups protecting the interests of speculators and banks, at the expense of the poor and working people behind a veil of secrecy. Governments reduced to the status of figureheads under international capitalist management. Both major political parties kowtowing to big money flaks. Media myopia fueling public ignorance. And himself, a truth-teller whose message changes history.


His task, Sanders had long ago decided, was to raise political consciousness and expose the real agendas of the powerful. 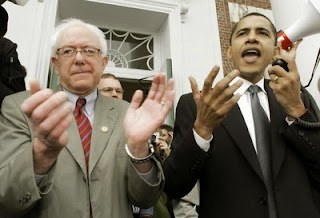 Yet when I asked whether he would consider a run for president he laughed. It would be fun, he admitted, and predicted that “we’d get a good response.” At that point, however, before his election to the Senate, the calculation was that staying in Congress gave him more influence than running an “educational” campaign.


Sanders said he considered it “imperative that people keep working on what is a very difficult task; that is, creating a third party in America.” But he had no plans to help develop one, in Vermont or elsewhere. “I am very much preoccupied and work very hard being Vermont’s congressman,” he pointed out, deflecting such a responsibility with customary bluntness: “I am not going to play an active role in building a third party.”


This sounded like a contradiction, but also reflected his experience and political predicament. He endorsed the idea of building a third party – in principle. But he had maintained an arms-length relationship with political parties since his races in the late 1970s. He seemed sincere when expressing the hope that the Progressive organization he’d helped to build would expand beyond Burlington – and he sometimes endorsed Progressive candidates. But he also backed Democrats, and sometimes discouraged Progressives from running, while generally avoiding involvement in party-building – especially since that could lead to calls to support Progressive candidates against Democrats.


Over time Sanders had made peace with the Democratic leadership. And he had never been embarrassed about playing to win. After all, he was making history, as he pointed out more than once. If the choice was between a “virtuous protest” and “popular appeal” he naturally went with the path to success – as long as it didn’t violate any core beliefs.


The remark sounded almost ironic. After all, giving a speech – pretty much the same one – is what Sanders does best. Over the years it had already taken him from third party obscurity to the most private club in the world. And after the 2008 financial meltdown and election of Barack Obama, it was only a matter of time until his pungent mix of middle-class outrage and “flexible” populism went from C-SPAN to prime time.


NEXT: The Lockheed Conundrum
Posted by Greg Guma at 4:34 AM