In 1826 William Morgan, a Freemason and printer from Batavia in New York, became dissatisfied with his lodge and decided to publish the details of some Masonic rituals. That September he was seized by parties unknown, taken to Fort Niagara, and never seen again.

It was widely believed that Morgan had been kidnapped and killed by fellow Masons, a suspicion that fed growing hostility to the order. The Anti-Mason movement spread rapidly across New England and eventually west, along the way introducing important political innovations like nominating conventions and the adoption of party platforms.
Morgan’s disappearance – a crime-based political scandal in its day – led more people to suspect that Freemasons were just not loyal citizens. In fact, many Masons were judges, businessmen, bankers and politicians, which made it easy at the time for ordinary people to view the group as a powerful, secret and potentially anti-democratic society. Others suspected its links to the occult and ceremonial magic. This was, after all, the time of the Second Great Awakening.
A more broadly persuasive argument was that the secret oaths administered by lodges could bind members to favor each other over “outsiders.” Popular outrage spread as people decided to challenge what they viewed as basically a conspiracy.

One of the leading Anti-Masons was Thaddeus Stevens, a Vermont native of Danville who made his name in Pennsylvania and later emerged as a leading abolitionist, founder of the Republican Party, and post-Civil War activist for civil rights and stiff retribution against the south. Attending the Anti- Mason Party’s first national convention, Stevens attracted notice with his strong speeches and oratorical style. In one of them, “On The Masonic Influence Upon The Press,” he deplored the lack of publicity given to the convention and attributed that as well to Masonic influence.
In 1833 Stevens was elected to the Pennsylvania legislature on the Anti-Masonic ticket, where his legislative talents quickly showed themselves. He was an excellent debater with a devastating wit who could cut his opposition to shreds. He also knew how to maneuver behind the scenes. But that’s another story…
Two years before Stevens’ election in Pennsylvania the Party was already so popular that Vermont elected an Anti-Mason governor, William Palmer. His victory indicated the intensity of public opposition to elite power in the state, not to mention how far a single-issue movement can go.

William A. Palmer was no political newcomer. He was a popular Jeffersonian Democrat and former judge who had previously represented Vermont in the US Senate by the time he ran for governor on the Anti-Mason ticket in 1831.
Vermonters had already elected another Anti-Mason to Congress, and more than 30 members of the movement represented the party in the General Assembly. Still, it was a shock to the establishment when Palmer led in the statewide popular vote. It took nine ballots in the legislature before he won.
And who was Palmer? A graduate of UVM with a law degree, he had practiced in Chelsea and held numerous posts, including State Supreme Court judge for two years. In 1818, when Palmer was elected to the US Senate he was a Democratic-Republican. In 1823 he became a National Republican. He was a delegate to three State Constitutional Conventions between 1828 and 1850. In other words, Palmer was clearly part of the political establishment – but not a Mason.
He sincerely believed that secret societies were “evil.” But he didn’t make radical claims in his speeches. In his first inaugural speech, Palmer promised to appoint only men who were “unshackled by any earthly allegiance except to the constitution and laws,” and he suggested legislation to prohibit the administration of oaths except “when necessary to secure the faithful discharge of public trusts and to elicit truth in the administration of justice.”
And why did Palmer want to “diminish the frequency” of oaths, as he said. Because of the “influence which they exercise over the human mind.”  In other words, a chilling effect. 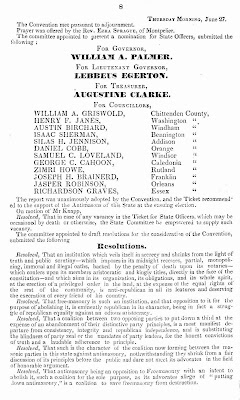 In 1832, the national Anti-Mason Party conducted the first presidential nominating convention in US history in Baltimore. Its presidential candidate was William Wirt, a former Mason who won 7.78 percent of the popular vote – but Vermont’s seven electoral votes. William Slade, who would later become Vermont governor as a Whig, was sent to Congress as an opponent of both Masonry and slavery. Since the state had one-year terms of office, Palmer ran and won again. But he still couldn’t attract a clear majority of the vote. This time it took 43 ballots before he was re-elected.
In 1834, he finally won on the first ballot, but that was because the other political parties could see the collapse of the Anti-Masons coming and were competing to win over its constituents.
Palmer also led in the 1835 vote. But this time he couldn’t convince the legislature. After weeks of wrangling and 63 ballots the lawmakers declared themselves deadlocked and turned to Silas Jenison, a former Anti-Mason official and winner of the Lieutenant-Governor’s race. The rest of the Anti-Mason ticket was endorsed by the Whigs.

Gridlock in Vermont’s General Assembly over Palmer’s elections was so disruptive that it led to a Constitutional Convention and the amendment that created the State Senate. Criticism of the unicameral legislature was not new and proposals for a second chamber dated back to 1793. But in 1836 the idea of reducing the power of the House achieved critical mass. The Convention stripped it of “supreme legislative power.”
Crucially, bankers backed the change, mainly with the expectation that two chambers would be easier to handle. This is circumstantial evidence suggesting that, in opposing the Masons, the movement was also confronting the banks. The general public mainly thought the House had become too arrogant, intransigent and uncooperative.
For Vermont Anti-Masons, the use of secret oaths represented an invasion of the “civil power of a sovereign state” and a violation of liberty. In June 1833, at the height of movement, the Anti-Mason State Convention passed a dozen resolutions defining its position.
Vermont’s Anti-Masons ultimately succeeded in forcing the lodges to close – for a while. But that left the state party with less reason to exist. In 1836 Vermont’s Anti-Mason leaders, including future governor Slade, joined the new, anti-Jacksonian Whig Party.
The party’s third and final National convention was held in Philadelphia’s Temperance Hall in November, 1838. Almost entirely engulfed by the Whigs, the gathering unanimously supported William Henry Harrison for President and Daniel Webster for Vice President. When the Whig National Convention chose Harrison and John Tyler, the Anti-Masons did nothing... and soon vanished.