Burlington in the Age of Burke

For these Burlington stories, let’s start in September 1902, ten years before Teddy Roosevelt’s famous 1912 visit to Barre. The President had been to the Queen City a year earlier. That day he was riding with Percival Clement on his railroad after a visit with Vermont Lieutenant Governor Nelson Fisk at Isle LaMotte. Then word came through that President McKinley had been shot by what the papers were calling a “crazed anarchist.”
Now, a year later, Roosevelt – ridiculed as a “wild man,” that “damned cowboy” hated by Wall Street, Vice President under McKinley for less than a year – triumphantly returned to Burlington as President.
Clement was about to play a strange and convoluted role in Vermont’s progressive history. Decades before his stiff resistance to womens’ suffrage he was part of a progressive fusion movement that attempted to overthrow the Proctor Republicans. He was also a railroad tycoon, owner of the Rutland Herald, and friend of Teddy Roosevelt.
In 1902 Mayor Donley C. Hawley stood with the new president at the train barn near the waterfront, surrounded by flags and bunting. Roosevelt told the Vermonters, “You have always kept true to the old America ideals – the ideals of individual initiative, of self-help, of rugged independence, of the desire to work and willingness, if need, to fight.”
The truth is, Republicans like Hawley were actually suspicious of “their” president. His rhetoric about a “square deal” for working people and control of big business sounded, well…. radical. But Democrats like James Burke were unabashed admirers. Burke was an Irish Catholic blacksmith and a leading spokesman for the city’s growing Democratic Party. He had been an alderman and run unsuccessfully for mayor in 1900 and 1902. Now he was part of a statewide fusion movement with dissident Republicans. Like Roosevelt, he projected himself as a pragmatic reformer, thriving on idealism, moral outrage and an ability to inspire the masses. 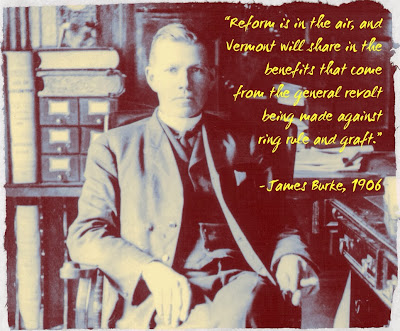 .
March 3, 1903. The hotly contested mayoral race between Burke and Hawley drew an overflow crowd to the city clerk’s office that night. The men in the room – remember, only men could vote – perched on windowsills or stood on the rail that surrounded the aldermanic table. As the results for various wards were announced the winning side cheered. Hawley, who was a surgeon, came out of top in the affluent areas. But Burke’s persistence was finally paying off in the inner-city, immigrant wards. And he had two compelling issues: a proposed city-owned light plant and local licensing of saloons.
When the final votes were tallied, Hawley had a three-vote margin. But that was because City Clerk Charles Allen refused to count ballots marked twice. Burke was livid and took the matter to the Vermont Supreme Court – and won, gaining certification of an 11-vote victory by early summer.
It took more time, but he also got a light plant. Two years later, during his third one-year term, Burke’s daughter Loretta pressed a button at the bandstand in City Hall Park energizing two circuits of streetlights with power from the newly built plant.

Burke’s political vision stretched beyond the borders of the city, and by 1906 he became further embroiled in an effort to wrest control of the governor’s office from the Republicans. To attempt it he forged a delicate personal alliance with Percival Clement.
The Burke-Clement alliance was largely rooted in political expediency. Both men wanted to be governor and knew that a Democrat could not win statewide. Both had also been mayors, Clement in Rutland, although his control of the Rutland Railroad didn’t ease negotiations about the Burlington waterfront, which was owned by Clement’s line and Central Vermont Railway. But there was also an ideological affinity that bridged the class barrier between them. Both were ardent supporters of the “local option” to issue saloon licenses and vocal critics of graft by marble and coal interests dominating the GOP.
In 1906, Roosevelt was on the attack against the beef, oil and tobacco trusts. In Vermont Clement was still warring with the Proctors, especially Fletcher Proctor, the Republican candidate for governor.
Burke had won another term as mayor over Walter Bigelow, the 40-year-old chairman of the state Republican Party and night editor at the Burlington Free Press.  He saw a “bright and glorious future” for the city and wanted people to move beyond “a narrow or partisan point of view.” That was also part of the reason he was involved in the movement Clement was building.
At first it was called the “Bennington idea,” referring to the town where petitions first circulated for Clement to lead an independent movement that aimed to “save the state” after 50 years of Republican rule. But Clement’s supporters felt that a fusion with Democrats was essential, so 1906 they tried to induce Burke to join the ticket.
Burke wasn’t persuaded. Giving Clement the Democratic nomination would effectively put him in control of the party. If a Democrat won the presidency in 1908 Clement would get to hand out the patronage. The Democrats were still divided on June 28, the day both the Independent and Democratic state conventions were held in Burlington.
The Independents convened in City Hall. The Democrats met at the armory. Meanwhile a joint committee worked out an agreement to divide the state ticket. The Democrats would field candidates for half of the slate, Independents would fill the rest. After accepting the Independent nod Clement walked with Burke to the Strong Theater for a joint assembly.
The debate over fusion was heated. Some people accused Burke of opposing the idea because he couldn’t head the ticket. Eventually speaking for himself, Burke reminded the audience that he had backed fusion under Clement four years earlier. But the “local option” for alcohol was no longer a galvanizing issue and Clement was, after all, still basically a Republican.
The Democrats rejected Burke’s advice and approved a joint slate headed by Clement and Democrat C. Herbert Pape. With more than a thousand people packing the theater, Clement took center stage, Burke at his side, and launched into a long and fiery attack on the Republican machine, the marble companies, and the inefficiency and graft that was robbing the people.
Burke actively backed Clement’s war on the Proctor Republicans, spending much of his time that summer on the campaign trail attacking Republican graft and rule. As usual, his rhetoric was also rich with praise of Roosevelt, calling him “the greatest Republican since Lincoln and the greatest Democrat since Jefferson.”
“Reform is in the air,” he shouted from the back of Clement’s private train that fall, “and Vermont will share in the benefits that come from the general revolt being made against ring rule and graft.” Burke envisioned a popular coalition of Lincoln Republicans and Jefferson Democrats that would wipe out party lines. It might even combat corporate lobbying on labor issues like the nine-hour day and minimum wage.
But Fusion was defeated by Republicans united behind Proctor that November. And the following March, Burke came up short in his first mayoral race in five years – to Walter Bigelow. The defeat was devastating for political allies who lost their jobs and watched old opponents return to power. Twelve years later, in 1918, Clement did become governor – as a Republican.

NEXT: On the Waterfront
Posted by Greg Guma at 9:07 AM 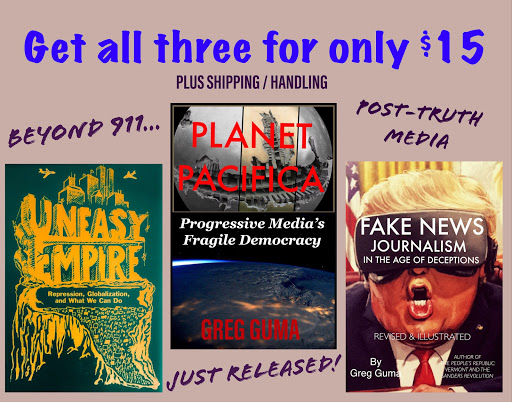