Peaceful Revolutions and the Power of Disobedience

While most people want to reduce nuclear and environmental threats, many also believe that neither climate change nor arms proliferation can be reversed through traditional channels alone.

When we talk about the American Revolution, the stories are often about military clashes or personal acts of courage in dangerous circumstances. This concept of our early history may account for the widespread identification of radical change with violence in the United States.

In reality, America's revolution, like many political upheavals, was largely a nonviolent liberation movement that spanned more than a decade. Certainly there were armed struggles, but the real transformation came from the building of substitute governments and massive resistance that led to virtual economic self-sufficiency before bullets were fired.

The power of Britain over the colonies was undermined between 1765 and 1776 by nonviolent civilian campaigns such as tax resistance, boycotts, hunger strikes and nonimportation agreements. It was a powerful outpouring of conscience and direct action, similar in many ways to the abolitionist and civil rights movemebnts, and later Gandhi's crusade to free India.

Today the world is again experiencing a powerful movement of conscience. Countless millions in North America, Europe and Asia have joined together in demonstrations, marches, sit-ins and other nonviolent activities to end the threats to global survival. While most people support initiatives to reduce nuclear and environmental threats, many also have a clear sense -- call it skepticism or realism -- that neither climate change nor arms proliferation can be reversed by the use of traditional channels alone.

If that's true, what will it take? Perhaps the same kind of active resistance that has been crucial in other movements for freedom and justice. 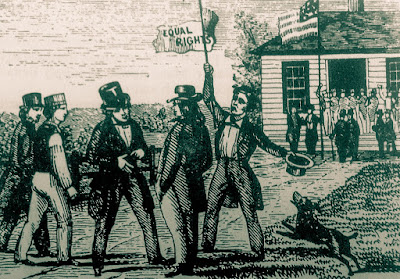 In the early 1980s, for example, Americans voted and spoke out overwhelmingly in favor of halting nuclear weapons production and deployment. During this period, Vermonters voted to freeze and reduce nuclear arms, cut military aid to repressive regimes like El Salvador, and transfer federal funds from military spending to programs that would create more jobs and meet social needs.

In the face of such sentiments across the country, as the government proceeded with the development of first strike weapons such as the Cruise, Pershing II, Trident II and MX missiles, many Americans moved from the halls of government to the streets. Churchgoers and religious activists were deeply concerned about what they viewed as idolatry of weapons. In the face of such militarism, the message of many religious traditions was similar: obedience to government cannot be absolute, and we must discriminate when human law conflicts with moral right.

When Jesus cleansed the temple during the week of his arrest and crucifixion, he was also conducting a campaign of civil disobedience aimed at the power centers of the established order. His law-breaking was a tool of rebirth and social change. The approach of Jesus is not unlike the modern democratic notion that a "loyal opposition" is obligated to resist unjust laws and policies to protect the integrity of the body politic. In the 20th Century Martin Luther King Jr. demonstrated this principle when he broke segregation laws to show that apartheid was incompatible with the Constitution.

Taking inspiration from Thoreau, Mahatma Gandhi demonstrated the power of nonviolent action to undo an unjust government. The "consent of the governed" was removed in India through a long revolt involving tax refusal, boycotts, raids, resignations, parades and seditious speeches. Gandhi's method confronted violence with civil defiance and love.

"Disobedience without civility, discipline, discrimination and nonviolence," Gandhi explained, "is certain destruction. Disobedience combined with love is the living water of life."

These days, with the threat of violence and nuclear escalation ever present, many determined people still turn to nonviolent resistance to prevent the outbreak of wars that could spark global catastrophe. In Burlington, this tradition goes back decades, to the June morning when dozens of protesters blocked the truck entrance to the local General Electric plant, producer of the Vulcan Gatling gun.

For engaging in this sit-down action, the protesters were ready to be arrested. And they were. But they were prepared because they believed that Vermont's many votes, petitions and rallies hadn't been really heard. Development of new weapons continued, intervention in Central America intensified, and anti-personnel weapons produced in Burlington were a significant component of this deadly foreign policy.

By blocking the factory gate, those committed to peace were moving beyond lobbying to incorporate tactics of active resistance. For them, obedience in the face of militarism, war and nuclear terror was a denial of conscience. But nonviolent acts of resistance can instead spark a redemptive transformation of society, one that includes well-planned conversion of weapons plants that protects the jobs of workers.

Like the American colonists who developed a new economy before their revolution, we can start the process of peace conversion by establishing local groups that involve workers, management and the community in planning for alternative, socially useful non-military production. At the same time, we can work for a broader change in priorities by supporting national conversion legislation that includes retraining and income security for those displaced.

Combining such direct actions with practical goals, in this high tech violent world, would be revolutionary in the best sense of the word.

The original draft of this essay appeared in The Burlington Free Press in June 1983, days before a march and civil disobedience to protest local weapons production. Those who participated in the large sit-in at GE, a first in Burlington, were arrested on orders of Mayor Bernie Sanders. At the time, Greg Guma was on the board of the Burlington Peace Coalition and, with Murray Bookchin, co-chaired  the Vermont Council for Democracy. 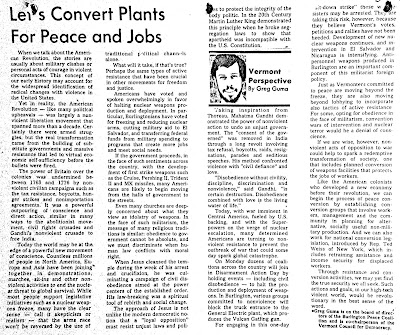