Sometimes it takes only one document – and some good timing – to shake things up. In early 1980 it turned out to be an FBI report about the surveillance of a nurse practitioner named Jed Lowy. Like many people, Lowy just happened to be in the “wrong place” at the wrong time. In his case, that place was a so-called Vermont “commune” that the bureau considered a gathering spot for alleged “extremists.” The difference was that Lowy obtained his FBI file via the Freedom of Information Act and then shared it.
One entry in the file revealed that the bureau was trying to identify the driver of a Blue 1970 Volkswagen, which had “previously been observed at New Left locations in Vermont.” The Albany FBI office contacted its Newark, New Jersey counterpart and discovered that the car belonged to a 53-year-old man, Lowy’s father. A search was initiated to see who might be driving it. 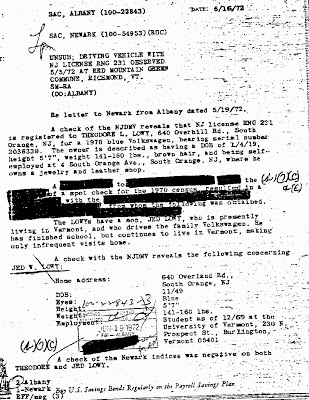 The article I wrote for the Vanguard Press, published on April 4, 1980, charged the bureau with misusing the US Census. The country was just days from beginning another one. The evidence was a document that said the following: “A (deleted) to (deleted) the (deleted) of a spot check for the 1970 census resulted in a (deleted) with the (deleted) from whom the following was obtained.”
Not much to go on. But in a letter to Lowy the Bureau explained that the deleted portions referred to other people whose privacy rights were being protected and the investigative techniques that had been used. Once they had Lowy’s name, they had zeroed in on him through the New Jersey Department of Motor Vehicles and continued investigating for another six months. Despite the absence of any evidence they kept at it because of an alleged association with the Fresh Ground Coffee House, “a known contact point for extremist(sic) and associated with the Red Mountain Green Commune.”
When I contacted the FBI, an agent in Washington, DC office issued the standard denial: “The FBI does not utilize census information. Period.” Once I read portions of the memo, however, he decided to get back to me. In a follow up call, the new line was that he wasn’t “at liberty to discuss documents that the FBI has.” He didn’t repeat the denial. We had struck a nerve.
The story created an immediate sensation, shooting across the country within hours. Vermont’s congressional delegation said the repercussions could be serious and promised to investigate. By the weekend, our scoop was a national sensation and Lowy was being interviewed on the CBS Evening News. A week after the initial story, the FBI acknowledged that, although census information hadn’t been used, an agent had indeed posed as a census worker.
The technique, a bureau spokesman told the New York Times, was known as “pretext interviews,” in which agents assume false identities. But he added that new FBI guidelines said agents shouldn’t pose as representatives of other Federal agencies without the consent of that agency. That, of course, raised the question of what the Census Bureau actually knew. Unfortunately, the investigation never went that far.
Instead, the FBI released a less deleted version of the memo. What it revealed was that a “pretext call” – the first deleted phrase – to the Lowy home had “resulted in a conversation with the maid…” In other words, an FBI agent had posed as a census worker to find out more about a 30-year-old health worker who had merely visited a “commune.” FBI Director William Webster protested that the technique was legal – but added that all field offices had been told not to do it.
Attorney General Ben Civiletti was a more candid. In a letter to US Senator Patrick Leahy, he said the FBI knew “it is wrong for an FBI agent to pose as a representative of the Bureau of the Census for any reason,” and had so informed its special agents. Webster subsequently put the revised policy on paper: the pretext of being a census worker shouldn’t be used, or even requested.
What we never learned was whether it was an isolated occurrence or a standard procedure. But a small crack had been made in the covert iceberg. An alternative newspaper had ignored the Washington consensus to challenge the intelligence community. It wouldn't be the last time.

"The largest problem may not be conventional surveillance -- a bugging device installed with a warrant, or a cop with a camera -- but rather the indiscriminate use of video and other tools, along with the implications for manipulation of human behavior. People who know they are, or may be, watched end up acting differently. Through a combination of design and commercial accident, businesses are grafting surveillance to Skinnerian theory to create a powerful new form of conditioning."

Related Story: Crimes of the Surveillance State - A Victim's Story

"The ultimate test for any drug, device or technique, argued the report, was “application to unwitting subjects in normal life settings. It was noted earlier that the capabilities of MKULTRA substances to produce disabling or discrediting effects or to increase the effectiveness of interrogation of hostile subjects cannot be established solely through testing on volunteer populations.”

Related Story: Secrets R US - From the NSA to Outsourcing

"How often, and to what effect, covert operations have succeeded is another of the mysteries that comprise an unwritten history of the last half century. Beyond that, systems like Echelon violate the human right to individual privacy, and give those who control the information the ability to act with impunity, sometimes destroying lives and negating the popular will in the process."