Blaming Outsiders: An American Tradition Since 1800

This isn't the first time that the US has faced a potential constitutional crisis or charges that the presidential race was rigged with the aid of a foreign power.

Rumors of conspiracy and war were also rampant at the end of the eighteenth century. The "enemy" then was France. Some warned ominously that Napoleon's troops were moving on Florida and Louisiana. By April 1798 Congress had voted funds to arm merchant ships and fortify the harbors. In May it instructed US warships to capture any French vessel caught in American waters. 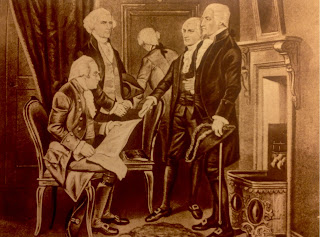 Public fears were on the rise and the pressure for action was intense. John Adams' wife Abigail supported a declaration of war and criticized Congress for acting too slowly. But the President and Congress decided instead to focus on enemies at home.

As the summer temperature soared past 90 degrees in Philadelphia, lawmakers went further than even Adams hoped, passing the notorious Alien and Sedition Acts. Adams called them emergency wartime measures. After all, there were more than 25,000 French immigrants in the country! And most of them were survivors of the slave uprising in Haiti on the island of Santo Domingo. Obvious security threats, right?

As historian David McCullough notes, there were French newspapers in Philadelphia as well as French schools, booksellers, boardinghouses and restaurants. “The French, it seemed, were everywhere,” he writes, “and who was to measure the threat they posed in the event of war with France?”

The Alien Act was a Trumpian initiative aimed directly at immigrants, increasing the period of residency to qualify for citizenship and giving the President the power to deport any foreigner he considered dangerous. But the more consequential law turned out to be the Sedition Act, which made it a crime to stir people up or write anything critical of the government, Congress, or the President.  Editor Noah Webster backed the idea, declaring it time to stop other newspaper editors from libeling public figures. Even George Washington commented privately that some publications deserved punishment for their attacks. War was the pretext, but a little censorship sounded reasonable to many leaders. We've heard similar calls from Trump.

Officially, the purpose of the Sedition Act was to crack down on illegal actions that tended to cause the disruption or overthrow of the government. Rather than a foreign spy, however, the first target was Benjamin Franklin’s grandson, Benjamin Franklin Bache, an opposition editor in Philadelphia arrested for libeling Adams. In daily attacks he had belittled Adams as “President by three votes,” mocking his weight and describing him as a British tool. But Bache was never convicted, instead dying of yellow fever before he could stand trial.

Vermont Congressman Matthew Lyon was equally high on Adams’ list. After the debate over the Alien and Sedition Acts, he had demanded a roll call vote to see “who are friends and enemies of the Constitution.” Jefferson agreed, calling the repressive new laws an unconstitutional “reign of terror.” But what triggered President Adams into action was a letter to the editor. Responding to an attack in the Federalist Vermont Journal, Lyon wrote the US should stay out of war with France. The Adams administration, he went on, had forgotten the welfare of the people “in an unbounded thirst for ridiculous pomp, foolish adulation and selfish avarice.”

There was also a comment about Lyon’s foot and the seat of the president’s pants.

That was enough for Adams and his allies. Lyon was placed on trial, in Vermont, in front of a judge who had run against him for Congress, convicted of bringing the President and government into contempt, fined $1,000, sentenced to four months, and marched in chains through the streets of Vergennes to jail. The sentence was imposed in October 1799, just a month before he was up for re-election.

But Adams and the Federalists had made a tactical error. They had targeted a hero, a popular figure who had come to the colonies as an indentured servant, fought the British with Ethan Allen, and married one of Allen’s cousins. As a result Vermont voters defied the President and re-elected him anyway. Despite Lyon’s occasionally extreme behavior the arrest had made him even more popular, an early example of the state’s outspoken, contrarian, and sometimes defiantly independent streak.

The next year, for the only time in US history, the President - John Adams - ran against the Vice President - Thomas Jefferson. Since Matthew Lyon’s trial for sedition, eleven more people had been convicted under Adams' law. But that didn’t stop the Anti-Federalist press from calling him a monarchist, an old man too impressed with the British. Some claimed he was insane.

The attacks on Jefferson were equally harsh, from weakling and French intriguer to libertine and unrepentant atheist who mocked Christian faith. But the criticism of Adams came from both Anti-Federalist republicans, who considered him a warmonger, and Federalists, who said he was too cowardly to confront the French.

The race turned out to be closer than anyone expected. Adams did well enough in New England, but lost in New York, the West and South. The outcome in New York was largely the result of Aaron Burr’s influence in New York City. Counting up electoral votes from the nation’s 16 states, Jefferson had 73 to 65 for Adams and 63 for Charles Pinckney, a Federalist stalwart from South Carolina. But Burr also had 73 votes, which created a tie. That meant the choice went to the House of Representatives.

Burr’s refusal to step aside and clear the way for Jefferson fueled suspicions that he was privately bargaining with the Federalists. Alexander Hamilton distrusted both men but opted for the current Vice President. “Mr. Burr loves nothing but himself,” he charged, “thinks of nothing but his own aggrandizement…Jefferson is in my view less dangerous than Burr.”

In the end, the tie-breaking vote was cast by Lyon, the same person whom Adams had targeted with sedition charges. Lyon respected Burr as a New York power broker, but he was philosophically allied with Jefferson. It thus surprised few when he picked the Virginian over Boston’s first citizen to be the next president. Burr became vice president and Adams became a one-term President

In 1801, the former president was still bitter -- and still blaming immigrants. “Is there no pride in American bosoms?" Adams wrote. "Can their hearts endure that (James) Callendar, (William) Duane, (Thomas) Cooper and Lyon should be the most influential men in the country, all foreigners and all degraded characters?” All four had been charged with sedition.

Adams called them “foreign liars." He also charged, a bit oddly at the time, that there were “no Americans in America.” It all sounds too familiar.
Posted by Greg Guma at 3:25 PM