Another Realignment in the People's Republic

It was Burlington's first mayoral race since the repeal of instant run-off voting. But there was no need for a second round. Miro Weinberger won handily in March 2012 with more than 5,800 votes. The turnout was above 10,000, up from 2009, when incumbent Progressive Bob Kiss won a second term in a close, controversial race with Kurt Wright that led to the end of IRV.
Under-estimated from the start, Weinberger delivered on a campaign plan to make inroads in the more conservative North End, but also polled above expectations in poor neighborhoods. In Ward 3, where Gordon Paquette – the last Democratic mayor — won his earliest victories, also the neighborhood from which Terry Bouricius introduced “third party” politics to the City Council in 1981, Weinberger was the top vote-getter with 65 percent.
When Mayor Bernie Sanders ran for re-election the first time in 1983, he won 52 percent of the vote and spent about $30,000. Weinberger’s victory was bigger, but it also cost him four times as much.
In 1987, Sanders defeated Democrat Paul Lafayette in five out of six wards. Then the new, local Progressive Party was close to having a majority. In 2012, however, after electing three mayors over 31 years and being the largest faction on the City Council, it chose not to field a candidate for mayor, dissociated itself from the incumbent it had put in office, and recruited only two candidates. The party chose not to endorse Weinberger, Wright or independent Wanda Hines. But Progressive Councilor Vince Brennan did back Wright, who also won the support of Independent Sharon Bushor and Sandra Baird, a former Democratic legislator and Progressive critic.
During the run-up to the Democratic Party caucus, state Sen. Tim Ashe, once a Progressive city councilor, looked like a more polished player with the necessary cross-party appeal. Others thought that Bram Kranichfeld, the 31-year-old council newcomer from Ward 2, had some crucial backing from party stalwarts. Both of them, along with state Rep. Jason Lorber, were defeated in the course of an epic Democratic caucus that had to be reconvened in December after Weinberger and Ashe tied in the third round.
At Weinberger’s campaign announcement the previous September, held next door to City Hall in a former firehouse managed by Burlington City Arts, the first-time candidate charged that Mayor Kiss had put the city in “an exceptionally poor negotiating position.” Reluctance to discuss the details of Burlington Telecom finances had “left a mood of anger and anxiety about our future,” he charged. The 41-year-old housing developer also criticized the administration’s failure to secure funding before starting on a $14 million airport parking lot expansion. 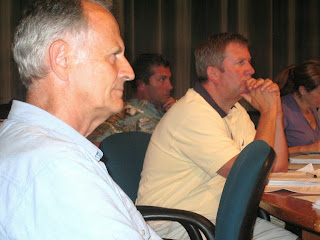 He looked like the underdog to Republican Kurt Wright throughout most of the general election. Although Weinberger raised more than twice the money and had the Democratic establishment in his corner, Wright appeared to have an inherent edge. He had waged two previous mayoral battles, had a working knowledge of city policies and operations gained over 20 years as a councilor and state lawmaker, and was creating a nonpartisan coalition that looked a little like the one that had worked well for Bernie Sanders. None of it was enough.
Afterward, Progressive Party Vice Chair Elijah Bergman argued that the Democrat’s victory wouldn’t have happened without Progressive support. If so, the assistance for Weinberger was capped by the endorsement of Bernie Sanders, issued one week before the vote.
On the same Town Meeting Day, across the state more than 60 communities, including most of Vermont's largest, passed resolutions recommending a constitutional amendment to make sure that corporations do not continue to have First Amendment rights as people. In Burlington, the call passed with almost 80 percent. A separate advisory resolution inspired by the Occupy protests also did well. In a tradition that dates back to the 1980s, voters urged the state and federal governments to adopt revenue and investment policies that reduce the growing disparity of wealth and ask the largest corporations to pay a fair share of taxes.
Max Tracy won easily as a Progressive in Ward 2, an area situated between the university and the waterfront in the Old North End. This was also where Hines had her best turnout, 15 percent. But the groundswell she predicted didn't materialize. In North and South End wards she attracted between 2 percent and 4 percent. The overall results also represented a setback for the GOP, which lost both a council seat and the immediate presence of Wright, the party’s most visible leader. Hines turned out to be a weaker candidate than expected, while Wright reached an apparent ceiling on his appeal.
Three decades of executive power had ended for the progressive movement. But Weinberger promised not to “clean house” and offered to provide continuity. In a sign of the political realignment to come, his initial budget advisory team featured former Progressive official Carina Driscoll, Sanders' step-daughter and future mayoral candidate; longtime business leader Pat Robins; former independent candidate Dan Smith, son of Republican Peter Smith, whom Sanders defeated to enter Congress; and Doug Hoffer, once a CEDO staffer in the Progressive era and soon-to-become Progressive/Democrat State Auditor.
Posted by Greg Guma at 7:49 AM