For most Vermonters the biggest stories five years ago were the state’s response to Hurricane Irene -- the state’s worst natural disaster since 1927, the struggle over closure of Vermont Yankee, and passage of the first-in-the-nation universal health care system. After almost a decade the state also had another Democratic governor, Peter Shumlin, who pledged to usher in single-payer health insurance and usher out Yankee. Meanwhile, around the country people were starting to rally to Bernie Sanders' economic critique.
The larger story, in the Green Mountains and beyond, was the sea change in public discourse – from anti-government rage to a more progressive focus (also angry) on economic inequality and concentration of wealth. At the time conservatives called the new movement class warfare, but it actually reflected an overdue recovery from a period of national amnesia.
The pace of change was quickening – revolt across the Middle East, Greece and other countries on the verge of economic default, plus a titanic struggle for the soul of the US in the presidential race. Democrats were experiencing Obama Fatigue, while among the leading Republican candidates Mitt Romney had the organization and the money. But he was a member of the 1%, a “vulture capitalist” who seemed to lack core principles. 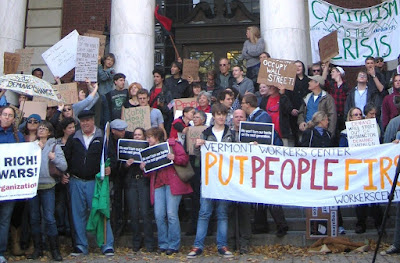 From Vermont to San Francisco, thousands were protesting the growing wealth disparity between the rich and almost everyone else. Using social networks and a collective approach the Occupy movement had spread rapidly to hundreds of cities, gaining momentum as unions and politicians offered support. According to a Gallup poll, 44 percent of Americans felt that the economic system was personally unfair to them. More to the point, the top 1 percent had greater net worth than the “bottom” 90 percent. And in an unusual generational twist, more people under 30 viewed the general concept of socialism in a positive light than capitalism.

The number of Vermonters living in poverty had changed little in the previous 40 years, moving almost imperceptibly from 12.1 percent in 1969 to 11.5 percent in 2009. In early 2012 Vermont Interfaith Action – part of a national group that was looking for solutions to “systemic issues that prevent our most vulnerable citizens from enjoying the quality of life God intends for us all” – confronted several lawmakers and Secretary of Administration Jeb Spaulding with this disquieting reality at the Ohavi Zedek Synagogue in Burlington.
The gist was that state government had failed to effectively address economic inequality. The event, billed as an “economic action,” attracted about 125 people from a variety of faith communities on a wintry Sunday afternoon. The issue of poverty was being “held hostage to a shortage of funds created in part by the refusal to ask wealthy Vermonters to do more,” the report’s authors declared. They accused state leaders of having succumbed to fear “by some who claim that raising taxes on the wealthy will result in capital flight.”
When asked if he would work to avoid cuts in social programs by raising taxes on the wealthiest Vermonters, Tim Ashe joined the two other senators, Democrat Sally Fox and Progressive/Democrat Anthony Pollina, in saying they were on board. Rep. Martha Heath, who chaired the House Appropriations Committee, was more equivocal. It would depend on balancing various needs, she explained, and urged those in the room to make their case at legislative hearings.
State funding was being misallocated, Ashe charged. He pointed specifically at the Vermont Training Program, a Department of Economic Development initiative that subsidized wages and trained employees in new and existing businesses. Although the emphasis was supposed to be on enterprises that could not afford to fund training, profitable enterprises like Green Mountain Coffee Roasters and General Electric Aviation in Rutland had received more than $400,000.
When his turn came to speak Pollina pointed to a drop in median family income for Vermonters. Inequality was greater than at any time since the 1930s Depression. But his prescriptions, beyond some tax changes, were to improve the process for setting the state budget and develop a state bank, an unlikely proposal that had been part of the Liberty Union Party’s platform four decades before.

From Outside to Inside

This article is adapted from Progressive Eclipse, available from Amazon, based on reporting for VTDigger. To download a sample:
PROGRESSIVE ECLIPSE: BURLINGTON, BERNIE AND THE MOVEMENT THAT CHANGED VERMONT
Posted by Greg Guma at 8:05 AM