Listen In, Listen Up: The People’s Republic Podcasts 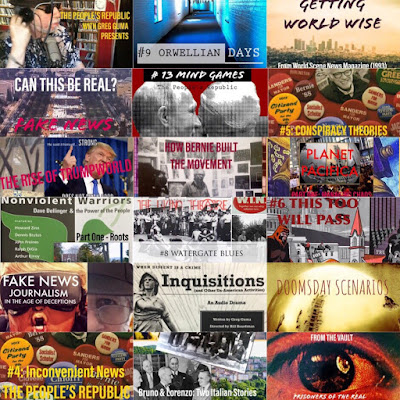 MAVERICK PODCASTS
With Greg Guma
Get episodes with a free Spreaker App
Or SUBSCRIBE ON iTUNES, GOOGLE, SPOTIFY, iHEART, CASTBOX...

“Illiberalism — that’s one of the current euphemisms. It’s actually a global cultural counter revolution, an authoritarian surge, along with the emergence of a league of extraordinary despots. But it’s been coming for a while.” - October, 2019

Episode One: Upheaval and Realignment

Listen to "The People’s Republic: Episode One" on Spreaker.

Episode #1 introduces the series and looks at some of the reasons why progressives in Vermont found themselves on the defensive just as Bernie Sanders was emerging nationally, poverty in the state, and the political evolution of Progressive leader Anthony Pollina.

Inquisitions — An Audio Drama in 3 Acts

Listen to "Inquisitions — An Audio Drama — Act 1" on Spreaker.


When national security and civil liberties are at odds, fundamental rights are often undermined or violated. “Inquisitions (and Other Un-American Activities)” explores this timely theme through a dramatic recreation of the Haymarket bombing in Chicago and other crackdowns on dissent. With the FBI interrogation of activist Lucy Parsons in 1919 at its center, Act 1 of the play takes listeners back to the birth of the movement for an eight-hour workday and the resulting violence in May 1886. Act 2  recreates the post-Haymarket show trial of eight German activists. The interrogation of Lucy Parsons continues — by a young J. Edgar Hoover — as she defends her controversial life. In Act 3, the trial concludes as capitalist oligarchs celebrate on a surrealistic dream train. Before her interrogation ends Lucy Parsons remembers her fight for clemency and the unjust hanging of her husband and comrades. Written by Greg Guma, directed by Bill Boardman, and produced by Catalyst Theatre.

Listen to "Nonviolent Warriors - Part One (Roots)" on Spreaker.

“There is no moment better than now to remember what Dave Dellinger has stood for and to fight for it together, all of us — for peace and justice.” — Howard Zinn

In October 2001, artists and activists on the front lines of social change gathered in Vermont for a celebration. Together they also created this audio documentary on David Dellinger and the power of the people, with songs, poetry, dramatic readings, rare recordings, and personal reminiscences. Written and directed by Greg Guma.


Latest Episode
Listen to "The People’s Republic #2" on Spreaker.

Listen to # 6: This Too Will Pass
Every day we get more examples showing how nothing is certain and almost everything is in flux. Trump may be a master con artist, but the harsh realities are piling up. This episode looks at culture war and progressive values, Bernie Sanders’ campaign chest, lost horizons at Pacifica Radio and Burlington College, resistance to the F-35s, and learning to live with the unexpected.  Theme music by Dave Lippman.

Listen to #2:Breaking Up the Vermont Men’s Club
In this episode, Greg looks at Vermont’s record on women’s rights, some early struggles along the path to suffrage, and the limited progress in the century since. Plus...Burlington’s two other progressive mayors and the short life of Instant Run Off voting.

Listen to "Bruno and Lorenzo: Two Italian Stories" on Spreaker.

For several years, Greg has researched his family’s roots in Italy. In this episode, he presents some of what he has learned, beginning with thoughts on the region’s troubled history, then focusing on the story of two brothers — grandfather Bruno, who emigrated to the US in 1902 and became a successful businessman, and his more radical brother Lorenzo, an anti-fascist fighter who ultimately became mayor of Parenti, his hometown.

In this episode, Greg looks into the state of America’s breakdown, the problem of Kentucky, rating Mueller’s performance, Vermont and the F-35s, Bernie Sanders and Cardi B, reviewing the Democratic Debate, and how Donald Trump and Sarah Palin paved the way for a new Dark Age.

Fake News: Journalism in the Age of Deceptions (audio book)

Listen to "Fake News: Journalism and Deceptions" on Spreaker.
Listen to other chapters or the complete text: EPISODES


This timely study, also available as a paperback and e-book, examines the challenges confronting journalism in a post-modern era characterized by fraud and scandal, questionable elections, corrupt leaders, and phony news. Greg argues that sophisticated tools are used by governments and private interests to promote false or misleading stories, messages and narratives. But when people repeatedly exposed to lies are confronted with the truth, too many double down and believe the lie even more. Chapters include The Big Picture, Can This Be Real?, Hoaxes & False Flags, Manufacturing Terror, Seeing Red with Reagan, Perception Management, Pizzagate & Post-Truth Politics, A Crisis of Facts, and Beyond the Bubbles.

In this episode, Greg examines the FBI’s new focus on conspiracy theories, beginning with the threats posed by QAnon and “deep state” paranoia. But he also goes deeper, questioning the government’s current response strategy, looking at some questions raised about HAARP and Wikileaks, and offering suggestions on how to navigate in an era of truth decay.

Listen to "People’s Republic: Permanent Wars" on Spreaker.
The Rise of TrumpWorld (2015)

Fall, 2015: Before reality got lost somewhere, Mello Matt inquired during an on air phone interview, can Trump actually win? And is he really a fascist? Yes to both, Greg replied, but also part of a global cultural counter-revolution. This November 2015 segment from The Howie Rose Variety Show on WOMM begins with a story about meeting — and underestimating — Ronald Reagan in 1980, then moves on to presidential secrets, Trump-style fascism, and what the super-rich were warning before his election.

Listen to Permanent War  (2002)
Installing the Shah, when Saddam was our guy, the Trilateral worldview and Bush league double talk — These are just a few of the topics covered in a rapid-fire, wide-ranging discussion. Recorded live in September 2002, it marked Greg’s first appearance on The Howie Rose Show, the start of a 15-year run on two Vermont radio stations. Opening with remarks about Dick Cheney’s recent Vermont visit, the segment looks at the roots of war in Afghanistan and Iraq, media spin, power bubbles, and the politics of distraction. With ambient background and Howie Rose regulars FP, Silvie, Phinn and Thomas. (Originally aired 9/20/2002) Also listen to other Howie Rose segments in this series.


How Bernie Built the Movement

Listen to "Part One: Deconstructing a Revolution" on Spreaker.
Part One: Deconstructing a Revolution. As the 2020 presidential race heats up, Greg sits down with journalist Eliza Collins to discuss how the Sanders revolution began in Burlington, Vermont, his accomplishments as mayor, and how he has developed political coalitions that can win. This episode features stories about Burlington waterfront and downtown development — from the 1980s to today, Bernie’s relationships with unions and the peace movement, reform vs. revolution, and the danger of “friendly” fascism.

Listen to "Part Two: Vermont and the Inside-Outside Strategy" on Spreaker.
Part Two: Vermont and the Inside-Outside Strategy. As the 2020 presidential race heats up, Greg sits down with journalist Eliza Collins. In Part Two the discussion starts with Bernie’s 2020 strategy, priorities, and approach to socialism. Then the focus turns to  Vermont history, demographics and destiny, Bernie’s evolution in dealing with Democrats, why Republicans still become governor, and the movement’s accountability conundrum.

Listen to "How Bernie Built the Movement" on Spreaker.

Part Three: What Would Bernie Do. As the 2020 presidential race heats up, Greg sits down with journalist Eliza Collins. In Part Three he explains Bernie’s pragmatic populism, governing style, and the limits of change in Burlington during and after his years as mayor. He also offers some final insights on key initiatives in the 1980s, nuclear power and F-35s in Vermont, and the need for ongoing accountability.

Prisoners of the Real

Listen to "Getting World Wise" on Spreaker.

Getting World Wise: NATO after the Cold War, recognizing Angola, drug cartels take Central America, privatized smoking, and Hollywood’s addiction to spin offs, plus a musical US history lesson. Excerpts from one of Greg’s early news round ups, produced and broadcast in Los Angeles in 1993. With music by the Electric Flag, Bobby Lewis, the Capitols, and a special appearance by George Shrub, the singing CIA agent.

Listen to Prisoners of the Real: From Here to Paradise

From the Vault: Prisoners of the Real  — An odyssey in sound and thought. Recorded in 1992, this show incorporates ideas from Greg’s book, Prisoners of the Real, with a mix of jazz, folk, and world music. It’s core message: If we are going to rescue and transform human society, moving from the myopically “rational” to the liberating Dionysian, many of our psychic road maps have to be redrawn. The capacity for liberation is a latent possibility. But it may or may not become real. And one necessary step is honest reflection concerning our basic assumptions about ourselves.
Posted by Greg Guma at 5:27 AM