The interpreter warned us about getting into East Berlin. “They’ll probably hold you an hour,” he predicted. “Normally, it would be a half hour but they’re in a bad mood because of Brezhnev.”
The Soviet leader had died just two days before and bleak predictions circulated about how the shock, along with West German Chancellor Schmidt’s fall from power, would affect East-West relations. None of this changed our minds. A meeting would be starting at an obscure church on the other side of the Berlin Wall in a little more than an hour. We didn’t have the exact address and knew only a few German phrases. But it seemed worth the risk.
An East German journalist had mentioned it earlier that day. “You can only see the peace movement when people assemble,” he teased. The meeting was one of about 2,000 to be held during a ten-day period called the annual “Peace Decade.” All of the gatherings were taking place in churches, the unlikely hosts of a new movement. 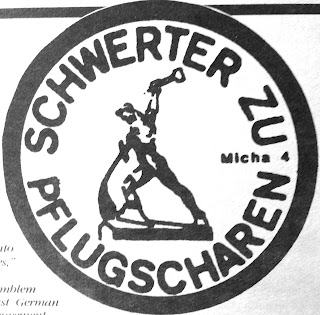 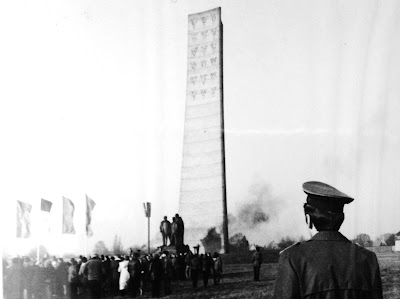 The camp's grounds were crowded that day with German tourists, but most weren't there to take in the museum's memorabilia. They had come instead for army induction ceremonies. Russian troops stood at attention beside German recruits in an open park where the camp's barracks once stood. Exactly the type of military show the Berliner Appeal sought to end.
At 18-years-old, Handler recounted, he had managed to get out of this camp alive, eventually reached Britain, and joined the Communist Party. But after the war he was expelled from West Germany for his political leanings and, taking a job at the Voice of the GDR radion station, became a true believer in socialism. He'd obviously told this story many times. The subtext was obvious. When I pressed him about the government's crackdown on peace activists and the banning of the Plowshares emblem, he evaded the issue -- but offered me a ride back to town.
In the privacy of his car, Handler was willing to admit that the government may have been too heavy-handed. Pacifists are naive, he insisted, but argument is preferable to police action. At a public gathering just two hours later, however, he reverted to the official line: "For us this pacifist position is an opening for morally disarming education." The ideological wall was back up.
Many East German leaders were once confined in Nazi camps, he reminded us. Then added grimly, "Such men need no pushing to work for peace. Unimaginable things CAN happen."
About seven years later, the Berlin Wall came down. Soon after that Germany was re-united. But deep divisions festered and today the unimaginable is as likely as ever. Both another Wall and another Cold War are possible.
Posted by Greg Guma at 4:59 AM