Security. What does the word mean? A feeling of safety or certainty, freedom from anxiety or doubt. That's what dictionaries say. And using those those definitions, does anyone feel secure these days? About the only thing that's certain is that we live in insecure times.
Not long ago, Americans were secure about a few things. Our form of government was the best ever devised, we claimed with total confidence. Our society was the most advanced, we said, our way of life the most desirable and progressive.
But most of those certainties are gone now. Our political and social systems, we see, are seriously flawed; worse yet, they seem to breed corruption.
Most societies can't even meet the most basic human needs – for shelter, food, and health care for all. And our way of life? In truth it could be the single largest factor in the violent disruption of nature all over the planet. We are no longer secure.


Even the richest among us, the very few for whom capitalism still works, will admit that the price of our domination and wasting of nature may be too high for us to pay. We may be coming to the end of all certainty about our long-term existence on the planet. And this change dwarfs almost every event in human history. We can't avoid living with the consequences of that now.
We are certainly no longer secure.
The whole idea of nature as something independent of human will, with its own rules, may become obsolete. But most of the solutions we hear don't look to the restoration of nature. What they focus on is "global management," new forms of manipulation designed to compensate for the older forms that produced the mess.
Scientists are working hard to find way of surviving in a "Greenhouse" world. The popular approach is to "take control of the planet." In 1987, a genetically altered bacteria was released into the environment in a California strawberry field. The object was to stop crop losses due to frost damage. Many more such experiments followed. Researchers are busily creating new species, in the hope of turning very living thing on Earth to our advantage.
For several hundred years we have believed that nature was nothing but a complex mechanism, a machine worse secrets we would one day unlock. And we humans were the "lords of nature," we thought, destined to control this cosmic factory. We extended our search into the very heart of matter, the atom, and smashed it. But we finally saw that we were wrong. Atoms are not solid after all, nature is not a machine, and the universe can't be divided and dissected without the gravest of consequences.
The desire for endless material advancement, the basis of our addiction to growth, has made it impossible for us -- at least up until now -- to set limits, to stop dominating nature to suit ourselves. But that's what we have to do, each of us and all of us together. We must transform our way of life -- consume less, drive less, buy less. We must turn away from accumulation and toward sustainability.
We can't shift the burden onto others, particularly onto less developed countries. They didn't create the problem, we did. And we delayed the consequences by raping the "third world" in the guise of progress.
The old approaches – clever management, competition, inventions, invasions, engineering – will leave us with nothing but a deadened, artificial world. If we want to save the planet, we have to turn quickly from the mechanical to the creative, from dominating nature and human beings to cooperating with both nature and one another. The time has come to decide: either we continue to adapt nature to suit ourselves, or we change ourselves.
And even if we do all that we can, it will take decades for the climate to readjust itself. If we restrain growth and individual consumption the process will be slow. And along the way, there will always be temptations -- in the form of biotechnology, for example, and other clever plans.
But if we resist, if we defy the people who would "manage nature" into extinction, instead of defying nature itself, we may find a way back to harmony, cooperation and the ecological security we have lost.

These remarks were presented on October 20, 1989, at the opening of Building Ecological Security, a landmark conference held at City Hall in Burlington, VT. 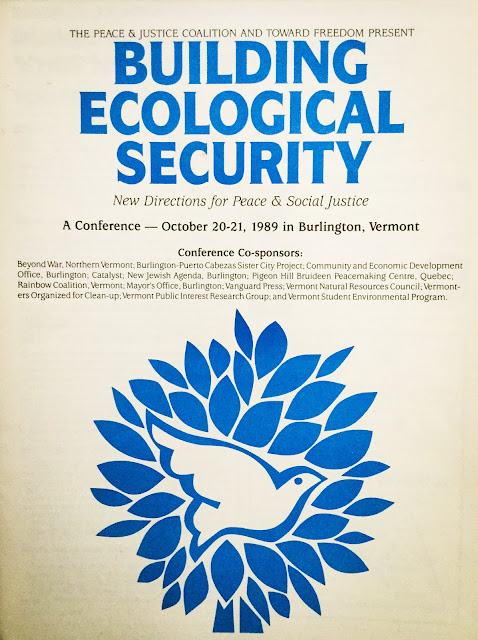