Listen to "The People’s Republic: Upheaval, Realignment and Pollina’s Winding Road" on Spreaker.

In 1989 The People's Republic: Vermont and the Sanders Revolution described the rise of Vermont's progressive movement. But many things changed after Bernie Sanders moved onto the national stage, while new economic and political challenges created pitfalls. Putting Burlington's story in a larger context, this sequel also explores the impacts of the Occupy movement, the struggle to overcome the Supreme Court's Citizens United decision, and other challenges. But the main focus is Sanders' rise and the hotly contested 2012 mayoral race in which developer Miro Weinberger beat Republican Kurt Wright and Independent Wanda Hines. In a May 4, 2015 interview with Scott Harris on Between the Lines, series author Greg Guma discusses the potential and challenges of Sanders' presidential candidacy.


Progressive Eclipse takes a closer look at why progressives found themselves on the defensive despite a record of success. It also examines the decision by Sanders and Mayor Bob Kiss to invite military contractor Lockheed Martin to Vermont and other problems that emerged after Burlington launched a municipally-owned cable TV and fiber optic system. Revisiting several Progressive administrations, it chronicles the twists and turns that led to Sanders' presidential run and Weinberger's mayoral victory. The Prologue is included below, a complete e-book is available from Amazon, and the following chapters are available online: 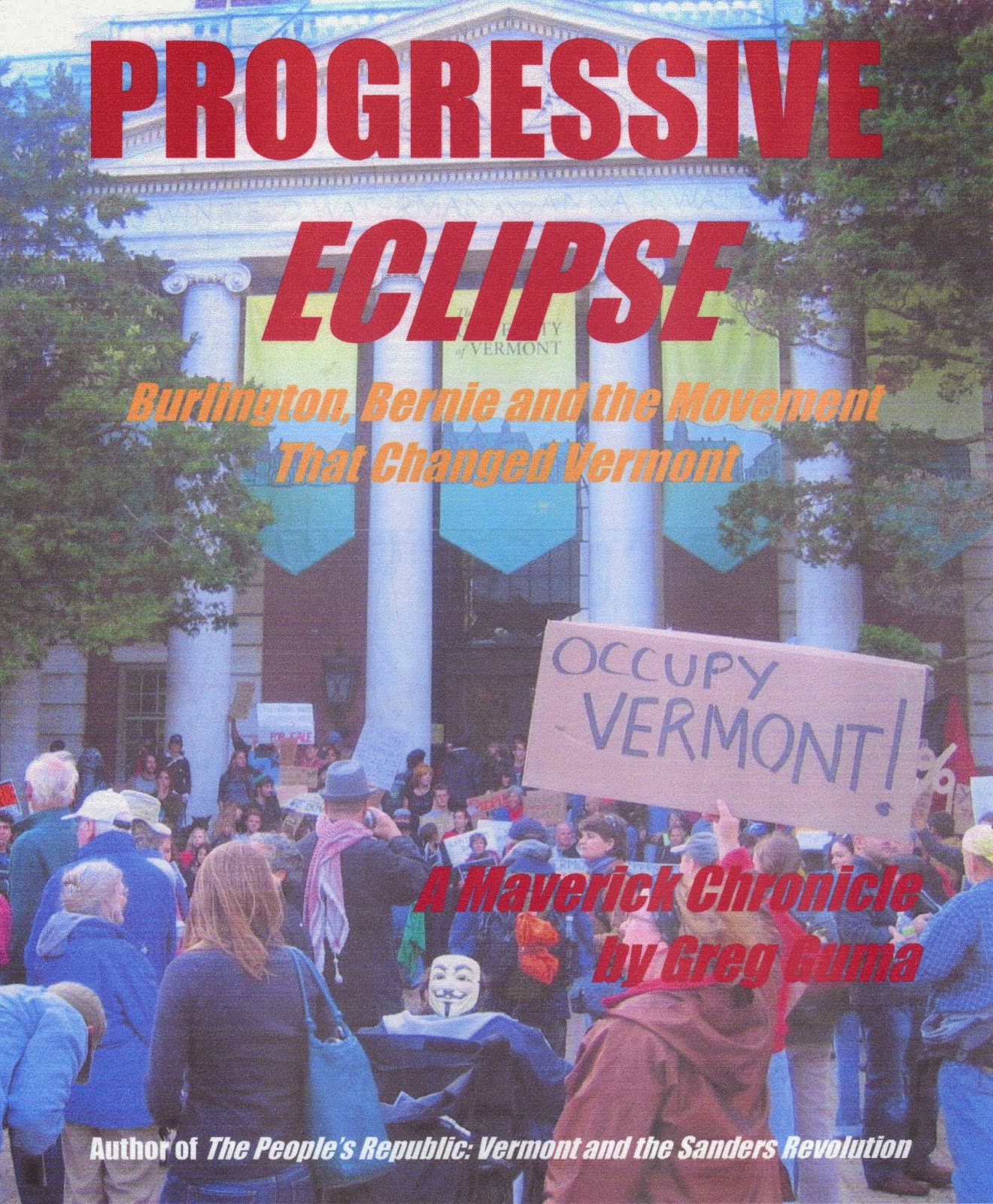 
“It’s time for a change. Real change.” That was Bernie Sanders’ slogan in his 1981 campaign for Mayor of Burlington.


The race had begun as a long shot but Bernie turned his shoestring operation into a real challenge. Nevertheless, even on March 3, 1981, Vermont Town Meeting Day, the incumbent and the local Democratic “old guard” still expected a decisive victory. After all, Ronald Reagan had been elected President only four months earlier. Sanders was no threat, they assumed, nothing more than an upstart leftist with a gift for attracting media attention.


Bernie wanted open government, he said, and different development priorities. He opposed an upscale Waterfront project and an Interstate access road to downtown.


He supported Rent Control. “Burlington is not for sale,” he declared. “I am extremely concerned about the current trend of urban development. If present trends continue, the City of Burlington will be converted into an area in which only the wealthy and upper-middle class will be able to afford to live.”


The incumbent mayor, Gordon Paquette, was a working class guy from an “inner city” ward who had grown up delivering bread and started his political career in 1958 as a Democratic alderman. By managing a patronage-based coalition known as the Republicrats, he had reached what turned out to be the pinnacle of his power as Burlington mayor from 1971 to 1981.


People called him Gordie, a street-smart political operator who knew how to appeal to Irish and French Canadian residents while meeting the needs of the business community. Comparisons with Chicago’s Mayor Richard Daley were not uncommon. But demolition of an ethnic neighborhood near the Waterfront and a “master plan” to replace it with an underground mall, hotel and office complex had made him some enemies.


Cracks in the façade of public calm slowly opened toward the end of the 1970s. Speculation drove up land values and rents, deepening the city’s chronic housing shortage. A restless youth culture emerged. Despite decent commercial growth, revenues couldn’t keep pace with the need for services. And the next steps in the city’s “urban redevelopment” vision would be disruptive – a highway into the center of the city, private waterfront development, and a pedestrian mall in the heart of downtown. The total cost, including public and private funding, was projected at more than $50 million. The local atmosphere was anxious and unsettled.


In January 1981, Paquette was nominated after a caucus fight for a sixth term. In previous races he had sometimes run unopposed. This time he prevailed in the caucus over Richard Bove, owner of the popular local Italian restaurant that bore his name. Afterward, Bove bolted the party to run as an Independent. Since Paquette was still a Republicrat at heart Republican leaders decided not to oppose him and instead banked on his re-election.


His main opponent became Sanders, a former “third party” radical running as an Independent who opposed Paquette’s proposed 10 percent increase in property taxes and promised to work for tax reform. He had never before run for local office, or even attended an entire City Council meeting. The recently formed Citizens Party, which had backed environmentalist Barry Commoner in the 1980 presidential election, ran three candidates for the Council, also known as the Board of Aldermen. The incumbents generally attempted to ignore their opponents, assuming that these electoral activists had no chance of upsetting the status quo.


But Bernie was hard to ignore, and local leaders of both major parties underestimated the growing influence of neighborhood groups, housing and anti-redevelopment activists, young people, the elderly, and the city’s countercultural newcomers. They also shrugged off the possibility that some of Paquette’s past supporters might want to send him a message.


By the time Sanders and the mayor finally faced each other over a folding table at the Unitarian Church tempers were hot. Bernie exploited rising local anger by linking the mayor with Antonio Pomerleau, the white-haired godfather of Vermont shopping center development. Pomerleau was leading in efforts to turn Burlington’s largely vacant waterfront into a site for commercial and condominium development.


“I’m not with the big money men,” Paquette protested. Frustrated and desperate to counter-attack, he warned that if Sanders became mayor Burlington would become like Brooklyn.  He looked honestly shocked when people hissed at him.


On March 3, with a few thousand dollars, a handful of volunteers and a vague reform agenda, Bernie Sanders won the race for mayor by just ten votes. Burlington had elected a “radical,” a self-described socialist who was determined to change the course of Vermont history. A Citizens Party candidate for the City Council, Terry Bouricius, meanwhile became the first member of the party elected anywhere in the country. In an odd twist, Bouricius won in Ward Two, the same place that had given Paquette his first term on the City Council 23 years earlier.


Prior to Sanders and the Progressives, Burlington had become a cultural backwater run by an aging generation, unresponsive to the changing needs of the community. If you attended a council meeting the first question often was, “How long have you lived here?” Political competition was the exception. Clannish Democrats and compliant Republicans made the rules.


The next three decades proved just how much the political establishment underestimated Sanders’ appeal, not to mention the potential for a progressive movement in the city and across the state. By 2011, the Queen City was known nationally for its radical mystique and “livability,” transformed from a provincial town into a cultural Mecca, socially conscious and highly charged. Over the years Burlington’s progressives not only consolidated a base in local government, they challenged the accepted relationship between communities and the state, and helped fuel a statewide progressive surge. They also weathered the storms of succession struggle.


Three progressive mayors managed Burlington for 29 of the 31 years after Sanders’ first win. Although Democrats continued to dominate the City Council during most of that time, and a Republican candidate for mayor could still win, a multi-party political system had changed the shape and style of city government, and, beyond that, fundamentally altered Vermont’s political landscape. 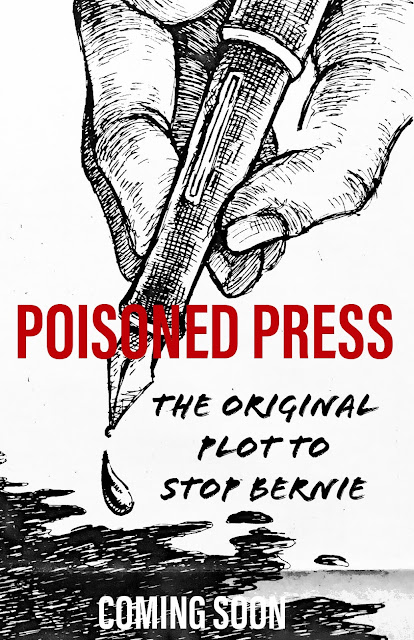